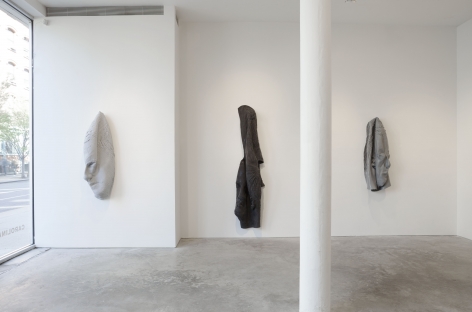 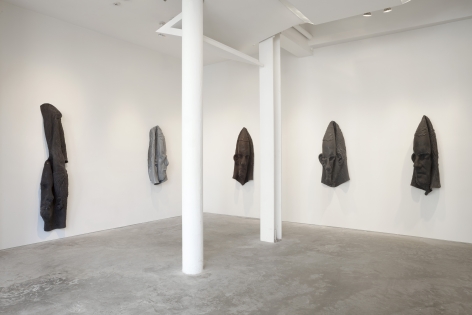 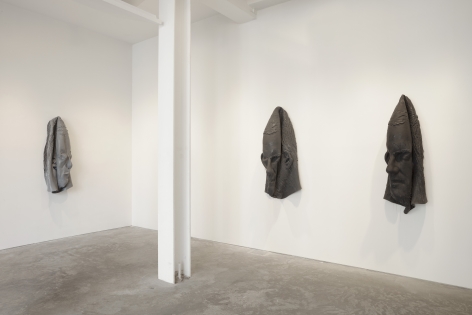 GOING AROUND BY PASSING THROUGH

Carolina Nitsch is pleased to present Richard Dupont’s third solo exhibition with the gallery, Going Around By Passing Through. The exhibition will consist of a series of new wall- hanging works in silicone rubber and a group of recent large scale drawings. In these new soft works, Dupont is pushing further into his prior investigations of extending body and performance into the art object, and reconciling the dissolution of form with the materiality of sculpture.

Since 2001, Dupont’s work has investigated the dialectical problem of giving physical form to a digital map of his own body. In these new rubber works, Dupont literally presents a "work-body" vis-à-vis an inversion of traditional mold making and casting techniques. He reverses the concavity of typical casting technique by brushing and dripping silicone over a positive form (a digital enlargement in foam of his own life mask), and then peeling that rubber off like an enormous skin. These "masks", "skins" or "shadows" are entropic and displaced corporeal volumes- stretched and pulled, peeled and cut within the field of gravity. The front, back, sides, interior and exterior can be grasped simultaneously. They are both heads and projections of heads. It is as though during the artistic process, the projection has become a physical thing.

The process brings about a transformation or conversion of a volumetric space to a "flayed" or flat space. Like real skin, they are flexible enough to shift from three dimensions to two and back again. The surfaces of the work and the body have become one, only to be once again displaced. These many repeated excoriations of the body reach a Duchampian threshold as they reveal the impossibility of transferring the memory imprint from one like object to another. The shadow has transformed into material thing- discarded, grotesque and formless.

The problem of reconciling the relation of body to surrounding space may begin with Leonardo da Vinci’s Sfumato : "The boundary of a body is neither part of the enclosed body nor part of the surrounding space." However, the body is used here as a raw material, a matter of fact thing. The emphasis is on process and materials in these works, and they reanimate concerns associated with the late 1960s and early 1970s. Artists such as Eva Hesse, Bruce Nauman and Robert Overby made works with rubber at this time that dealt with the problem of the body in the work, the experimentation with industrial materials, and the transposition of one surface onto another.

While these new works relate to earlier sculptural practices associated with ideas of process and body art, they also engage digital technology and techniques of computer assisted fabrication. Based, like his earlier works, on a digital model of his body, these new works could not appear less "digital" looking. Dupont’s use of these technologies has always maintained a critical position to their broader social applications in surveillance, mapping, and military and industrial design. However, with this exhibition, Dupont’s critical position has imbedded itself within his working methodology.

In addition to "Going Around by Passing Through" at Carolina Nitsch, Richard Dupont will present a simultaneous solo show at Tracy Williams, Ltd., "Shadow Work," opening also on May 2 from 6-8 pm. The exhibitions will run concurrently and will both consist of entirely new works in various media.