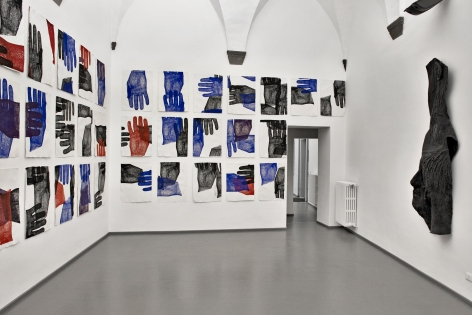 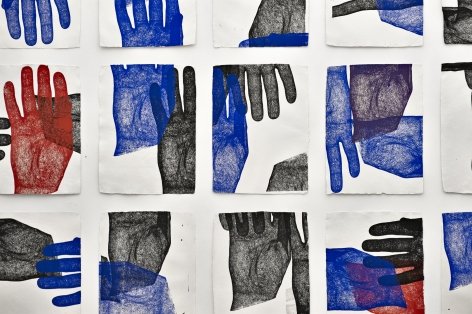 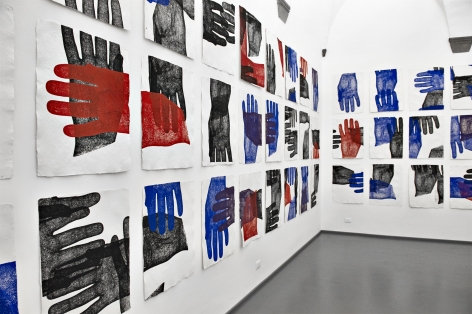 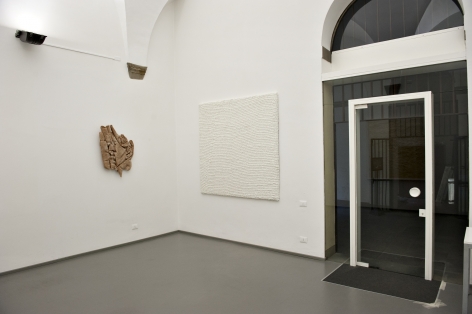 Selfie according to Richard Dupont

In the month of October 2013, on one of the best-known and most widely-used photo capture and sharing applications, Instagram, more than 140 million photos with the hashtag #me, were posted.

This is an impressive number and one year later, it has certainly grown exponentially. It bears witness to just one part of the Selfie phenomenon, in other words, the need for self-portrayal, here and now, that has been transmitted to so many people in every corner of the world.

This primarily narcissistic need grows from the continual desire to refine and improve our image of ourselves in the eyes of others. The same year, 2013, to certify its full acceptance, the word selfie became a new entry in the Oxford Dictionary: “a photograph that one has taken of oneself, typically one taken with a smartphone or webcam and uploaded to a social media website”. With this possibility of having ready access to a shot of oneself, anytime, anywhere, there has been a continuous stream of faces and visages, united by the same stereotyped expressions, now collected mainly on the web, creating the largest gallery in which the most typical obsession of our time can be exhibited: the desire to show ourselves as “we would like to be” rather than the way we are in reality.

On the other hand, a feature of contemporary life is our continuous re-stating of our identities, a need that requires us to generate new narratives of the self and the self with others. However, this redefinition of the self should occur while moving from one experience to another, through our relationship with the world, through mental as well as physical 'workouts', as neuroscience tells us. Our life begins, develops and ends in the quest to discover who we are, struggling to grasp and affirm our identity. This affirmation does not occur simply with an ongoing and always fresh photographing of our image. Identity is not merely a question of snapshots or wanting to change one’s body with the most cutting edge surgical techniques.

Some commentators and scholars connect, perhaps too quickly, the phenomenon of the selfie to the self-portrait genre to identify authorship in the Polaroids of Andy Warhol. Not coincidentally, these are also characterized by a technique that allowed the snapshot to be visualized almost instantly (perhaps also influenced by the square format used by Instagram and other digital photography applications).

But are we sure that this is how it is? The capacity for self-portrayal is a far more complex problem than that of making an artificial image of oneself or simply certifying one’s presence in the cyber piazza.

Artists are familiar with the inner monologue and inner drive required for self-portrayal. And we have excellent and unparalleled testimony of this in Florence, where for 350 years, or from 1664, when Leopoldo de' Medici in 1664 began his outstanding and systematic collection, the Uffizi has been preserving and collecting the largest collection in the world of self-portraits by painters and sculptors. This substantial corpus of works ranges from modernity to the present day, when this genre seems to have found a new focus and new forms beyond the traditional iconography of the half-length portrait. The self-portrait is a genre frequented by artists. It has endured over time, marking a constant feature in the history of art and, far more than a fashion, recounts the real evolution of research into the ego in each period. While in the portrait, it is crucial that the painting resemble the subject, in the self-portrait, a large degree of uncertainty is tolerated, because this is, first and foremost, a product of imagination and memory. Both could be compared to a map that we know does not properly and completely reflect the features of the territory that it is showing, or better, representing. Except that the portrait is more similar to the map that we hold in our hand and look at to get our bearings, while the self-portrait corresponds to the map of ourselves produced by the brain. In this case, there is no distinct ego that reads, observes and, if necessary, produces; it all happens within us. “My brain - writes the philosopher and neurobiologist Patricia S. Churchland- does what brains do and there is no distinct ego that separates the maps of the brain.” If it is possible to look at these maps today, and in the future make them even better, it is thanks to the development of digital technology in the biomedical field with which it is possible to correlate our scanned brain activities, which are differently coloured in some areas, with our subjective experience. This is one option that offers greater transparency with respect to our body perceived as dark and impenetrable but which also produces a new and unprecedented closure, inasmuch as the scan will be our direct subjective experience, with all due respect for those who continue to believe, also according to philosophical and not only religious tradition, in the role of the soul as the source of thought, perception, hopes, dreams, decisions and feelings, as in Descartes’ error. From this perspective, the idea of ​​the self-portrait as a privileged access to the soul, at least according to the common opinion retrieved from a romantic idea, is no longer suited to our era.

In this great game of self-portrayal just described above, from the selfie to the new technologies like computerized tomography, and again to the self-portrait that has always accompanied our history, Richard Dupont enters full on and takes a step sideways, as is required of an artist. The in-depth and detailed analysis of his body, or other anatomical fragments of it such as his hands, that characterize his works, go beyond the effect of a research that aspires to a direct resemblance to the subject to, first of all, make a work that finds its formal autonomy and a memory. In his case, the digital and liquid work, easily manipulated with software, since 2001 has been based on a single matrix that he acquired after having his body scanned at a United States military base. A different approach to one’s own body, this was done in the same year that the project for mapping the human genome ended, and therefore at the time that the scientific community became fully aware that biological information could be digitally coded, manipulated and potentially reproducible. Dupont seems to immediately seize the possibility for seeing and measuring our body in a way that is totally different from that of the past. He never misses an opportunity to open up new spaces where advanced digital processing and creative tensions intersect. The notion of a body created on the bare reference of images made using post-ocular technology, or the ability to look beyond the capacities of the eye, fixing an image of it, introduces the idea of ​an organism and makes the body an object. But the body-thing we know through these imaging devices is not another reality, but the same reality in a different mode. Dupont uses this mode to call into question the prevailing fantasies and philosophies that establish our being and give us our identities. The possibility that ours has, and that is right in front of us, thanks to its digital body-thing, is that of being disassembled and reassembled, of functioning as an eternal dissolving process, decomposing and recomposing itself again. But it is also the way to continue to experiment around sculpture, once again using the most advanced technologies such as 3D printer with which he makes most of his works. His idea of ​​sculpture is based on coming into being, mutation and malleability, characteristics of the software he uses, as well as the materials. In Bifurcated (2007), a headless body appears in its drawn out extremity, outlined by twisted planes and curved openings. If it were not for the cinema culture that pervades us to the point of making it look like a character straight out of some science fiction movie, it could also seem like a Mannerist figure for the bizarreness of its shapes. These forms seem to let themselves go, to accept the challenge of the material as is the case in the large heads of the series Going Around by Passing Through (2013-2014) that hang from the wall, and are not recognizable like the head of Medusa hanging from the raised arm of Perseus in Benvenuto Cellini’s Mannerist masterpiece, in the Loggia dei Lanzi in Florence. In this case, Dupont, as well as incorporating the iconographic tradition of the skinned man, which is also found in a drawing by Gaspar Becerra, author of the panels “Anatomy of the Human Body” by Juan Valverde de Amusco, and before that in Michelangelo’s St. Bartholomew in the Sistine Chapel, seems to return to the Häutung (1984) by Joseph Beuys or the mid-Sixties experiments by Richard Serra, Robert Morris, and Bruce Nauman, when hanging various materials, including felt and rubber, allowed them to take on their natural shape. It was nothing more than a way to continue investigating and endowing them with other desinences. The method of hanging soft materials on the wall was also used by Oldenburg for his objects. One only has to think of Soft Ladder, Hammer, Saw and Bucket (1967). In an interview with Rosalind Krauss in 1973, Oldenburg talked about his objects’ resemblance to himself, his skin, his body. Each one of Oldenburg’s objects could therefore be understood as a self-portrait. It is the same for Dupont.

There is no need to recognize the face in the contemporary self-portrait. On the contrary, one of the main characteristics seems to be that of concealing the face and head. An important role is played by these fragments and by the hands, which we have always believed to be another expression in which feelings can be read. In the series of drawings entitled Biometry (2014), once again Dupont does not flee from history but makes it concrete by emphasizing abstract painting effects on paper, with that fine mesh in black, red, blue and purple, characteristic of the geometry of the scanned body’s perimeter. This evokes the three-dimensional effect that once again refers to the body-object or, alternatively, to its immateriality on a screen. The screen provides a limit, a surface, the boundary between us and the world. It is our skin, and when printed with the new technology, turns into lunar landscapes or areas with a strong material aspect, but contrasting every imperfection as is the case with DEM (2013) or The Last Invocation (2013).

Making art, like doing science, does not mean abandoning the presence, the way of making things mundane, but in making them mundane adopting a different perspective to better analyze phenomena. With a single selfie, Dupont manages to achieve not simply a reproduction of himself, but the development of different lines, starting with himself, lines that represent a possible cultural evolution that affects the meaning of identity and ego in our society.

For any further information please visit www.eduardosecci.com or contact the Gal- lery at +39 055283506 or write to gallery@eduardoecci.com