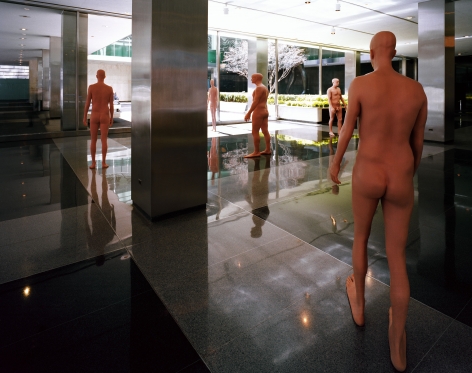 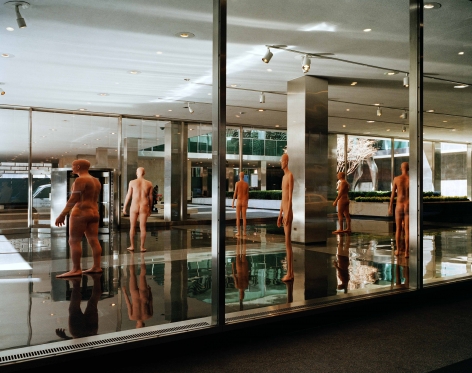 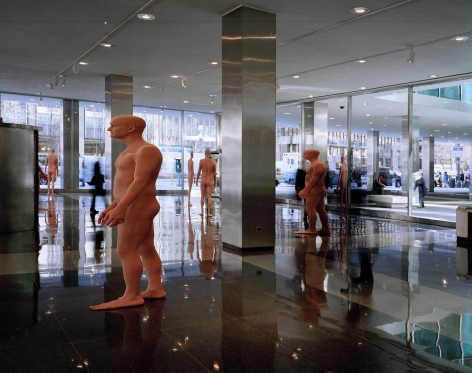 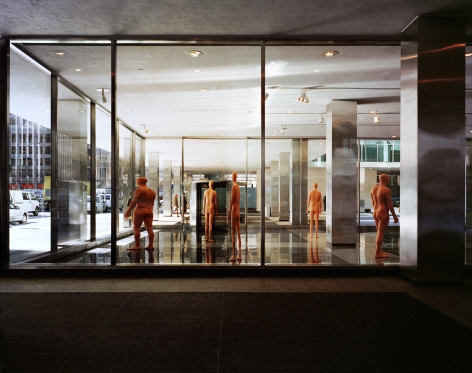 The Lever House Art Collection is very pleased to announce the opening of Richard Dupont’s “Terminal Stage” at the Lever House. The site specific commission will open March 20th and remain on view until April 26th, 2008.

The project’s title, “Terminal Stage”, refers to the themes of biological metamorphosis and transformation that have been central to Dupont’s work since 2003, when he began producing sculptural tableaux and animation based on a three dimensional digital scan of his own body.  As Dupont has stated, “Many psychologists are now speaking theoretically of the beginnings of an “evolutionary shift” in the species- as our cognitive functions shift to adapt to our new age of information. Increasingly forced to process information in a visual format, and simultaneously denied the empirical authenticity of that same information, we now live in a condition of mass cognitive dissonance.” “Terminal Stage” is intended to position the viewer in a perceptual/ physiological encounter which takes place between the space of the mind and the physical world.

The biological transformation that Dupont speaks of mirrors more rapid advances in our scientific technologies- which are quickly transforming the human body into a malleable form- the sum total of a genetic code which will be increasingly manipulated through genetic engineering. In addition, vast data collection repositories and massive surveillance and identity recognition systems are rapidly replacing individual identity and privacy with a different code. Global market systems use complex demographic software to increasingly target and develop our collective consumer urges. This is also calibrated through extensive data collection, both general and highly personal. These are all monolithic and largely invisible forces that are increasingly shaping our lives.

Dupont’s manipulations of the data used to define his own form reflect an interest in both anthropometry and its more recent extension, biometrics. In physical anthropology, anthropometry refers to the measurement of living human individuals for the purposes of understanding human physical variation. This system of identification, begun in France in 1883, was the precursor to all identity recognition systems of today. In contemporary life, anthropometry plays an important role in industrial design, clothing design, ergonomics, and architecture, where statistical data about the distribution of body dimensions in the population are used to optimize products. Biometrics refers to systems of identity recognition, such as fingerprint and retinal scans. Dupont’s effective insertion of his own body into the vast depersonalized matrix of biometrics and industrial design began in 2004 with a full body laser scan.

To accomplish the full body scan, Dupont arranged via the internet to travel to a General Dynamics facility on the Wright Paterson Air Force Base and participate in a broad anthropometry study. The examination involved extensive manual body measurement (traditional anthropometry) as well as a full body laser scan. He was one of some 10,000 people (mostly military personnel) who had participated in this study. General Dynamics sells the data from such studies to both the Military and large clothing manufacturers in the private sector. Both use the generic averages to design anything that “interfaces” with the body- ejection seats, flack jackets, helmets, blue jeans, socks. These systems and designs are concerned with averages and the standardization of the body. As Dupont has stated, “The model of my body that was captured by the scan is highly detailed, but it is also a type of surrogate or clone.” As such, Dupont’s model represents a type of “everyman”, and his virtual manipulations of the model speak more to the loss of identity than to the identity politics typical of the art of the 1990s.

“Terminal stage” is intended as a public art piece. The involvement of the viewer is essential in the meaning of the piece. It was also conceived as a site specific intervention. As the first Modern structure built on the grid, Lever House is a charged and highly symbolic site; emblematic of the revolutionary changes in architecture and urban space that were to take place over the half century since its construction. The lobby space confounds traditional readings of “public” and “private” as well as “interior” and “exterior” space, and the installation will emphasize the instability of a single reading of the site. It is both a “terminal” and a “stage”. The transparency of the site will emphasize the implication of the viewer, the pedestrian, and all of the traffic flow around the building.

If Dupont’s work is grounded in the social, his explorations are also driven by their often utopian faith in the capacity of art to expand and alter perception. His works are rooted in the tradition of those who have attempted to portray- in representational form- the visions that lie beyond rational perception. With similar effect to those artists who have adopted the ecstatic metaphor of mind altering drugs, Dupont’s work makes reference to the hallucinatory effects of technology- with its promise of transcendence and its equally potent destructive effects.

The installation explores the concept of a transcendent experience that involves the viewer in a situation or experience. It is an experiential piece with phenomenological overtones, and is staged as an examination of the relationship of the body to the increasingly spectacular and quasi-virtual character of our lived environment.

Richard Dupont’s work is in numerous private and public collections; including The Museum of Modern Art, The Whitney Museum, and The New York Public Library.